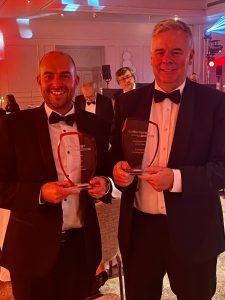 Darren and Andrew collecting the Best Society Award at the Money Age Mortgage Awards in June 2021.

Darlington building society has been named the best in the country in recognition of its outstanding support of customers, staff and local communities during the pandemic.  The Society won the “Building Society of the Year” category at the Money Age Mortgage Awards 2021, presented at the London Marriott Hotel, in Grosvenor Square.

From the beginning of the first national lockdown in March 2020, Darlington Building Society adopted an “open for business” strategy while other lenders were withdrawing from the market.

All branches remained open, and staff made telephone calls to vulnerable and isolated members, just to keep in touch and to check if they needed any help.
The Society made a swift decision that it would not use the Government’s job retention scheme, and staff were given assurances that no-one would be furloughed or made redundant.

In fact, the Society continued to invest in people, recruiting an additional 35 staff, including eight apprentices in customer care roles.
Despite global economic turmoil, the Society guaranteed that its annual pledge to donate five per cent of its profits to good causes would be extended until at least 2025, with £27,470 being shared between nine community organisations in December.

The Society’s commitment to volunteering also continued, with staff time being devoted to working as befrienders for Age UK, and marshals for the vaccination programmes.
Darlington Building Society chief executive, Andrew Craddock, said: “This national award is testament to the incredible dedication of our staff in continuing to support members and our local communities during the worst public health crisis in living memory.

“I am incredibly proud of the teamwork and community spirit that shone through during the most challenging circumstances we have ever worked through.”
As well as Building Society of the Year, Darlington Building Society was also named “Help To Buy ISA Provider of the Year” at the gala ceremony, hosted by comedian Zoe Lyons.

The Society was also highly commended in the Best Local Building Society category category at the What Mortgage Awards.

Chief Customer Officer, Darren Ditchburn, added: “Having come through an extremely difficult time, it is fantastic to be recognised nationally for the way colleagues pulled together and adapted so quickly to new working practices.

“The staff went above and beyond in getting the balance right between supporting each other, the members, and local communities, and to named Building Society of the Year is a just reward for all their efforts.”