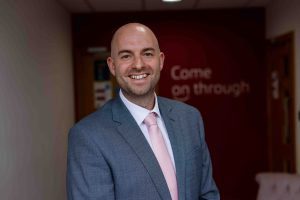 AN AWARD-WINNING building society has welcomed an announcement that a pilot scheme to make it at least 30 per cent cheaper for local people to buy their first homes is coming to the North-East.

Darlington Building Society has been one of a select number of lenders involved in the Government’s First Home scheme, designed as a sustainable way of helping first-time buyers achieve their dream of owning their own home.

The Society – named Building Society of the Year at the Money Age Mortgage Awards this summer – has already been supporting borrowers through the flagship scheme in other parts of the country.

Now, Housing Secretary Robert Jenrick has revealed that the third phase of the First Home initiative will be at Newton Aycliffe – with DBS describing it as “a major boost to generations of local first-time buyers”.

Mr Jenrick made the announcement when he visited Newton Aycliffe last week to unveil the first 12 cut-price houses on the Elder Green development.

Darren Ditchburn, Chief Customer Officer at Darlington Building Society, said: “The real value of this scheme is that it not only helps first-time buyers now – but it is designed to make sure there is always affordable housing stock in the country.

“We are proud to have been one of the lenders involved, and to have had a voice in shaping this innovative scheme. It is fantastic news that it has now arrived in the North-East.”

Under the First Home scheme, properties are offered at a discount of at least 30 per cent from the market price. However, when it comes back onto the market, it will be independently valued and the same 30 per cent discount will be passed on to the next  first-time buyer. The local authority will set a local connection test to determine which potential buyers are prioritised for the scheme, based on the needs of the community.

“The beauty of this scheme is that it addresses both short-term and long-term housing needs within local communities, and that will provide a major boost to generations of first-time buyers,” added Mr Ditchburn.

“We have seen big increases in house prices over the last 12 months, and that has coincided with the pandemic putting pressure to people’s incomes, so this is exactly the kind of sustainable strategy we need.

“Raising a deposit remains the number one barrier to home ownership, and helping people onto the housing ladder is our core purpose at Darlington Building Society. This move enables families and key workers to be able to afford to take that all-important first step, right here in our heartland, in the communities where they live and work.”

Mr Ditchburn said the existing Help To Buy scheme, which ends in 2023, had made a huge difference to the first-time buyers’ market. However, that scheme only addresses short-term demand, with only the original buyers benefiting.

“The country is facing a critical shortage of housing stock and the First Home scheme is going to be a key part of the Government’s target to build 300,000 new homes each year,” he said.