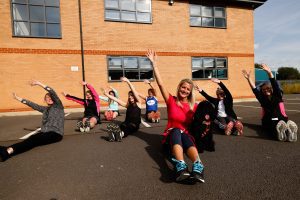 EIGHT intrepid colleagues are taking part in the Great North Run to raise money for charity.

Now, they’ve signed up to run the world-famous half-marathon to raise £250 each for a range of great local causes.

Sarah, a Business Development Manager, is running with her sister, Helen, is memory of their mum, who died from vascular disease seven years ago. Money raised by the sisters will be donated to the British Heart Foundation.

“My family has raised quite a bit of money for the British Heart Foundation over the years and this is another great opportunity to help what is a great charity,” said Sarah. “Helen has done the Great North Run before but it’s my first time, although I did the Darlington 10k two years ago.” Sarah’s adorable cockapoo, Luther, has even been signed up as the team’s official mascot.

Virginia, a Supervisor at Barnard Castle branch, will be taking part in her third Great North Run. She has chosen to raise money for the Multiple Sclerosis Society because her dad has the condition.

She said: “It’s obviously a cause close to home and it’s great that we’re taking part as a team, and all supporting each other.”

Simon, a Senior Underwriter, is running for mental health charity Mind. He completed the Ilkley Half-Marathon for the same cause two years ago.

He said: “It’s a charity very close to my heart because I’ve had personal issues with mental health. Mental illness has been even more prevalent during the lockdown so it’s more important than ever to support the charity.”

Emma, People Talent Officer, completed the Great North Run in 2018 and has also run the Darlington 10k. She is running in aid of Daisy Chain Project, a Stockton-based charity supporting autistic children and their families.

“I have colleagues with autistic children, and I know that Daisy Chain makes a real difference,” said Emma. “I’m looking forward to sharing the incredible atmosphere with my team-mates.”

Nicola, Lauren, Lisa, and Louise are all supporting My Sisters Place, a domestic violence service in Middlesbrough.

Nicola, Manager of the Middlesbrough branch, said: “My Sisters Place does amazing work and tackling the Great North Run is also a personal ambition, so I’m rising to the challenge.”

Lauren Fleming, Roving Supervisor, said: “It’s a new challenge for me but I want to give it a go. What better way than to do it in aid of a brilliant charity – it means you can’t back out!”

Louise, Head of Direct Distribution, said: “I’ve never done anything like this in my life but it’s on my bucket list and it’s for a really wonderful cause!”

Lisa, Manager of the Redcar and Northallerton branches, started the ‘Couch to 5k’ exercise plan a year ago and has kept up the running habit. “We’ve had an association with My Sisters Place for a long time, so I want to do my bit and achieve a personal goal,” she said.

Chief Executive, Andrew Craddock, paid tribute to the Society’s team of runners, saying: “Supporting great causes in the community is part of the ethos at Darlington Building Society. It’s fantastic to see how these members of staff are going the extra mile for some special charities.”