Allstars Netball Club, based in Hartlepool has been awarded £250 to purchase new match balls and First Aid equipment from the 5% Pledge fund. 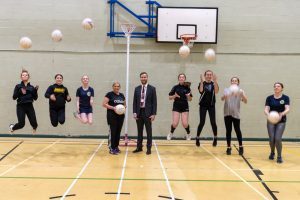 Allstars Netball Club, based in Hartlepool has been awarded £250 to purchase new match balls and First Aid equipment from the 5% Pledge fund.

Darlington Building Society has given a Teesside-based netball team £250 to purchase new match balls and First Aid equipment, after the team applied through the Society’s 5% Pledge.

Members of Allstars Netball Club, based in Hartlepool and serving the wider Tees Valley area, couldn’t meet to train or keep fit, which meant that fees were not being paid.

Manager and Head Coach, Vicky Riley, said: “We are very grateful to Darlington Building Society for giving us this much-needed grant. The money will be spent on new match balls, and First Aid equipment for six of the teams.

“It’s been an incredibly difficult year for many sports clubs, but we are looking forward to starting the new season in September.”

Allstars Netball Club was set up 15 years and now runs ten teams, with members aged from five to 78. Three adult teams also play in leagues around the North-East.

“We give people of all abilities the opportunity to play and be part of a team,” explained Vicky. “We offer a safe and inclusive environment for people to develop their skill, teamwork, and, above all, have fun whilst keeping fit.”

The club also runs a junior section, a Back to Netball group, and walking netball. Additional sessions are held in Middlesbrough and Thornaby, run by team members who have trained as volunteer coaches.

Darlington Building Society’s Stockton branch manager, Alex Robson, said: “This is a great, grass-roots organisation that encourages friendship, team spirit and fitness, regardless of ability. We’re delighted to have been able to use our 5% Pledge to help the club to keep going, after a very difficult year.”

To find out more about the 5% Pledge visit the Community section of our website.

For more information about Allstars Netball Club visit their website